Child of the Cold War


The essay below is the only piece of writing, apart from a poem published in Critical Quarterly, that has survived from my schooldays. Today, I wince when I see myself spouting such Cold War rhetoric. Never again would I express such conventional, "acceptable" views. Only a year later, when I was applying for admission to Birmingham University, I submitted an essay that was positively "bolshie" — and saw my application rejected in short order.

Note the self-deprecation toward the end of the article: A result, to a large extent, of the constant criticism I received from Kenneth Barnes and others at Wennington School, which had undermined my self-confidence. Although I still had a year and a half ahead of me at Wennington, I knew that the game was up — that my six years there were going to end in anger, disappointment and bitter recrimination. Indeed, my wrestle with that realization is the sub-text of the piece.

The "Mail" is the Birmingham Mail. The essay was written during the Christmas holidays of 1957-58, and published in early 1958. I received some "fan mail" afterwards, including a mystifying invitation to a Jehovah's Witness meeting.


When questioned about the future of mankind, our very first thought is of war. Will there be a third world war? How will all this trouble with Russia turn out?

This thought is prompted by the threat of the hydrogen bomb, the destructive power of which we hear of so often in the newspapers.

I believe that another world war is unlikely, and sincerely hope and pray, as do we all, that it will not take place. With the knowledge of the power of modern weapons, we cannot imagine anybody with a sane mind even contemplating war.

But power does strange things to men, and after one blunder it might be too late.

Communism appeals greatly to the people of the highly populated, under-developed countries; and to the suitable ones among these, Russia gives her military and financial aid. She also attempts to show them that the Communist system of government is the answer to their problems, and is the most efficient.

When these countries are brought under their power the Russians then hope to turn on a divided, demoralised and decadent West.

I hope that the Russian designs fail, and they certainly will if we unite ourselves throughout the "free world," and oppose Communism through determination, and by raising the standards of living and prosperity of the under-developed countries.

The countries of Europe, once all-powerful, are now overshadowed by the might of the Soviet Union and the United States.

I hope the European frontiers will be dissolved, and the governments will unite to form a "United States of Europe" which will exceed these other nations in both industrial and economic resources.

We can even dream of world unification, but that can only be a dream, for none of us will ever see it.

In this age of science, the prospect of complete automation faces us with the possibility of mass unemployment in the future.

When machines can do the work efficiently, it will be difficult to persuade the employers to use manpower. If only they could use the machines and employ the same number of people at shorter hours, then everybody would be happy; but of course that is not practical.

After the launching of the sputniks the dreams of space travel now seem to come within the grasp of reality. I hope that we will be alive to see it, for who knows what possible openings it may give to man, and what possible benefits it may bring to him in the future?

Living in this scientific age we do not feel the need for religion so strongly, and many of us give it no place in our lives. That does not mean to say that religion is now unnecessary.

I think that it is a definite, fundamental human necessity, and could not be done away with.

We can see that the attempts to curtail the practice of religion in Russia failed, and I hope that these attempts always will fail, for when religion is "abolished" mankind degenerates into a paganism made worse by perverted science.

It is from religion that we get our conception of right and wrong, and from this that we make our laws; and they are the laws of the religious society which have respect for the individual.

If there were no religion the ordinary life would cease to have value, and we should all be numbered and state controlled as in "Nineteen Eighty Four."

There has been little thought until recently of the rise in population, but ever since the time of the industrial revolutions, and the improvement in medical service and child welfare, the population has soared. Soon the population of the world will have doubled; what then?

Unless something is done about it there will be starvation and nature will take her own way; what is sometimes called natural selection.

We can therefore either try to limit the number of babies born, through education and birth control, or try to produce more food.

It is difficult to foresee changes in the nature of people themselves, but everything depends on education.

Some people have suggested that we are losing our individuality. This may be true, for there is much in our modern world which discourages individuality.

If, however, we want people to have their own ideas and think for themselves, we must teach them to do so by giving them better education.

Everything in the world would have to change before we saw much difference in people, for they are very adaptable, and will always be here with their general and individual characteristics, their strength and weakness, their wisdom and stupidity.

Trying to decide where I fit in with humanity, and what I most desire for my future is very difficult. I am not really ambitious and only desire that my life should not be a complete waste of time.

When I think of the future I look to the end, and see myself spending the last few years of my life in the country, looking after my garden, watching birds, listening to music, and reading books.

These dreams may never be fulfilled, but between then and now there is a long gap in which I may do many things.

At the moment I feel uncertain and unsure. I know what is good and right, try to follow it and fail miserably. I know what I have to do to be successful, try to do it, and often accomplish the opposite.

I sometimes wonder whether it is I who governs my body, and whether I can really understand myself.

But perhaps this is natural for people of my age, and perhaps I can look to the future with hope.

NOTE: I borrowed "perverted science" from Churchill's speech to the House of Commons of June 18, 1940. 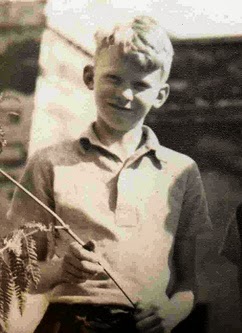 Wennington School was a coeducational, "progressive" boarding school founded by Quakers Kenneth and Frances Barnes at Wennington Hall, Lancashire, in 1940. After moving to Ingmanthorpe Hall, Yorkshire, in 1945, it retained the name "Wennington". The school had three headmasters: Kenneth Barnes, 1940-1968; Brian Merrikin Hill, 1968-1973, and Alfred Sessa, 1973-1975.

Within the constraints imposed by Google, I have finally come up with a design that I find pleasing. My only hope, at present, is that I still like it next year...and the year after that. But whatever happens, the site will endure — hopefully for as long as Google maintains its free Blogger service. - July 2013

My postal address is: Alan Ireland, PO Box 2052, Palmerston North 4440, New Zealand.
My central website, where a list of all my sites can be found, is at alanireland.com.
My email address is adilbookz(at)yahoo.com. 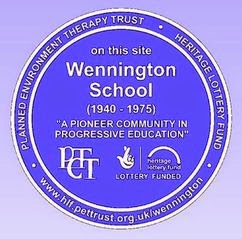 The "progressive" school is immortalized by the proceeds of gambling, but who cares?

A small Cotswold charity has been chosen to receive a special Japanese tree. More than 20 youngsters from Willersey Primary School teamed up with former students of Wennington School, Yorkshire, to plant the kaki tree in the field at the back of the Planned Environment Therapy Trust’s Archive and Study Centre in Toddington. Wennington School, which closed in the 1970s, has close links with the charity after transferring its archives into its care in 2002. Artist Jonathan Adamson, one of the school’s former pupils who works with the Revive Time Kaki project, felt the charity was a good site for the tree. The tree is a direct descendant of one which survived the atomic bomb which devastated the Japanese city of Nagasaki in 1945. - Tewkesbury Admag, July 28, 2013

According to Google's statistics, this website has received a total of 1259 page views from Ukraine - a number that is exceeded only by the numbers of page views from the United States and the United Kingdom. I would like to express my gratitude for this totally unexpected support. - July 18, 2013
Ласкаво просимо до відвідувачів з України. Вітається ваш інтерес.
欢迎来到我的访客来自中国。感谢您的兴趣。